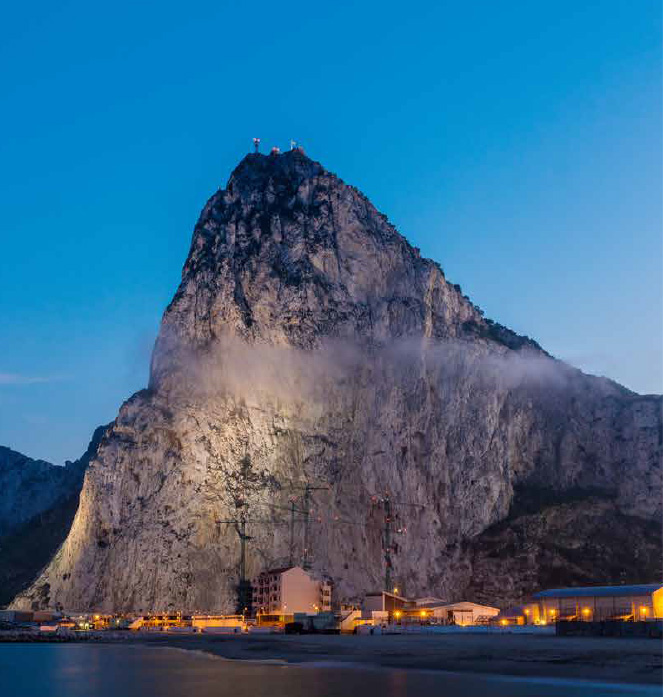 Gibraltar is an overseas territory located on the southern tip of the Iberian Peninsula. It’s colourful history dates to the stone-age as far back as 40,000 years ago, with fossil evidence found in Gorham’s Cave, belonging to the Neanderthals. In ancient times, Gibraltar was named “Mons Calpe” by the Romans and Ancient Greeks, who regarded it as one of the Pillars Of Hercules and to be of great symbolic importance, before being conquered in 711 by a predominantly Berber army under the command of Tariq ibn Ziyad. “Mons Calpe” was then renamed Jebel Tariq, the Mount of Tariq, subsequently corrupted into Gibraltar. In 1462, Gibraltar was captured by Spain before finally it became British in 1704, which it remains.

The territory in Gibraltar covers 6.7 square meters with two coast lines, one on the east side and the other covering the western side, where the vast population reside. There are no administrative divisions but there are roughly seven major residential areas or districts. Gibraltar has a Mediterranean climate, with mild rainy winters and hot dry summers.

Gibraltar is a popular port for cruise ships and attracts day visitors from resorts in Spain, particularly among British tourists and residents in the southern coast of Spain. It is also a popular shopping destination, and all goods and services are VAT free, but may be subject to Gibraltar taxes. Many of the large British high street chains have branches or franchises in Gibraltar including Morrisons, Marks & Spencer and Mothercare. Gibraltar is also key destination for corporate entities with many gaming companies, financial companies and private banks having department bases on the Rock.

NO TIME TO SEARCH?

We take away the headache.

Let us know in detail what properties interest you and our team will put together and send through a bespoke list of properties!

SELL OR RENT YOUR PROPERTY